When practicing at home, aside from the basics – an instrument and some sheet music – a musician will really be able to augment their practice with 3 tools – a tuner, a metronome, and a recorder. If only one of these could be picked, however, it would most likely be the tuner. No matter the skill level or aspirations of the musician, at one point or another most will be playing with others in a band or orchestra, or singing with others in a choir. Using a tuner will help the musician perform better with others simply by raising their awareness of playing the note right in tune. With the advent of smartphones, tuning apps have become the norm for tuning cellos, so we will be covering the best tuner apps for cello in this article.

Each instrument has its own unique tendencies – notes that tend to be sharp or flat by design. Sometimes these specific notes are consistent with each instrument (e.g. all F’s above middle C on trombones tend to be sharp due to the physical properties of the instrument), but sometimes a note will be naturally in tune on one instrument but a little flat on another. Using a tuner, the player will be able to figure out the tendencies of his or her instrument so that they can make the necessary adjustment before even playing the note – both when playing by themselves and with other people.

Before smartphones were mainstream like they are today, musicians had to go out and buy a physical device that would act as a tuner. With the technology available today, things are much more convenient – musicians no longer have to carry around extra hardware since there are a variety of very reliable apps that meet their needs. Tuning apps are fairly inexpensive, and some of them are even free. If you have access to a smartphone, you can utilize these apps to enhance your practicing!

As mentioned above, one of the other useful tools for musicians is a metronome. Not only are there apps for metronomes as well, but there are a variety of apps that include both – and more! Several of the apps on this list include both a tuner and a metronome, and some offer even more than that!

How to Use a Tuning App

Each app works a little bit differently when it comes to visually showing how in tune the musician is. Generally, an in-tune note is displayed at the center of the screen. In some cases, notes that are sharp or flat will be shown moving left or right of center, or sometimes up or down. Several apps utilize color – green being most common for an in-tune note, and red for being out of tune.

If colors are used, there is typically a spectrum rather than just two. If the two extremes are green (in tune) and red (as sharp or flat as you can get), the closer the color is to green, the closer to being in tune you are. The closer to red you get, the further from being in tune you are. Don’t worry – you will also know whether you are sharp or flat. For example, TonalEnergy uses these colors and also a vertical interface. A green, centered circle indicates an in-tune note. A half-circle above the center indicates that the musician is playing sharp, and a half circle below the center indicates that the player is on the flat side.

The main outlier in terms of general visual interface on this list is iStroboSoft (available for both Apple and Android products), which shows intonation through motion – the more still it gets, the more in tune the player is. Though each app is different, the visual representation makes sense and is easy to get used to.

Here is a list of the best tuner apps that are available for both Apple and Android products:

This app is a one-stop-shop for tools needed as a musician. It also has a metronome feature, a drone feature (it plays sustained pitches for you – it doesn’t make the phone fly away!), and has recording capabilities. The advantage of using the recording function on this app rather than the audio or video recording functions that are built into phones these days is that the player can go back and listen to what they played and it will activate the main tuning function of the app and show you how in tune each note was throughout what you played. This is particularly helpful because it means the player doesn’t need to stare at the tuner while playing the musical line – they can analyze it after giving a natural, thoughtful performance. For $3.99, this app is a real bargain for not only Apple users anymore – but Android users as well! 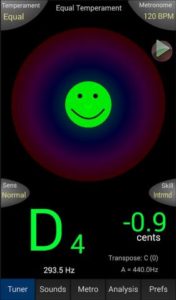 The iStroboSoft app was designed with the highest end tuners in mind. Strobe tuners, which are still highly regarded in the music world as being the most accurate tuners you could get, are where this app draws its inspiration. The visual interface of the app is even similar to that of a classic strobe tuner. The app is $9.99, and is available for both Apple and Android users. While it may seem costly, this app guarantees extremely precise accuracy. 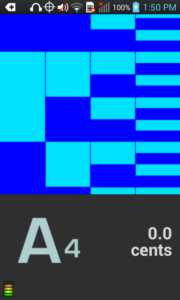 At $3.99, Tunable is another app that features a number of different functions – tuner, drone, and metronome. While the visual interface has some differences in comparison to other tuner apps, one of the common things among many of these apps is the use of the color green to show that the player is in tune. At the top of the screen, the pitch being played is shown, as well as how in tune it is. Displayed next to the note name is how many cents the player is away from playing the note right in tune.

Tunable can adjust the displayed note name if your instrument does not read in concert pitch, is accurate to 1/100th of a cent, and can actually track progress over time and show you how well your tuning is after working on it using the app for a period of time. Also included alongside the tuning feature is a drone. You can sustain single notes and chords or pick them off quickly across a wide range. The metronome feature offers adjustable tempi from 10 to 300 beats per minute, and can display both downbeats and subdivisions. 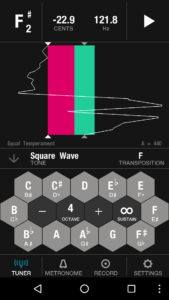 Before the age of the smartphone, musicians had to buy individual products for the different tools necessary to aid them in practice – two of the most popular being a tuner and a metronome. Among the most affordable of the tuners (which often also included a metronome) while still being very affordable was made by BOSS. Now with the increasing use of smartphones and apps for seemingly everything, BOSS has created an app using their software that visually looks just like one of their hardware products. This makes it perfect for the user that has used BOSS tuners in the past. This app is available for free for both Apple and Android users. 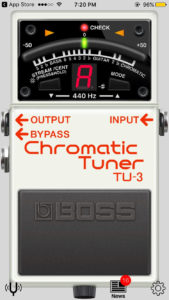 Tune your guitar, clarinet, timpani, trombone, or any instrument you like with this free app, available for both Apple and Android. This app is very user friendly – simply open it up, play a note, and hear whether you are playing in tune, or if you are sharp or flat. The app has a dial that goes from left to right as you change the pitch, giving a good visual representation of where you are. A user commented that “there is nothing negative to say about this app” in a review. 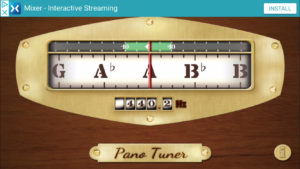 In my practice, when I am looking to use a tuner or drone, I have been using TonalEnergy for years now. Before that, I used Pano Tuner. I liked it, and it was a great free app to get me started, but it didn’t have all the features I was looking for. While free apps are great, and a good way to get started, apps that include more features (especially the drone – and the recording feature is a big plus as well) are well worth the small investment. In the end, all of the apps on this list have plenty to offer any musician – professional, pre-professional, or amateur. It comes down to deciding which features are most important to you in picking the right app for you. This is not an exhaustive list – there are countless tuning apps out there, so if there are different features or a different combination of features that you are looking for, check out some others.